The mention of solfa can strike fear into the hearts of many piano teachers. Their head is filled with questions and curiosities, and concerns about their own singing abilities. 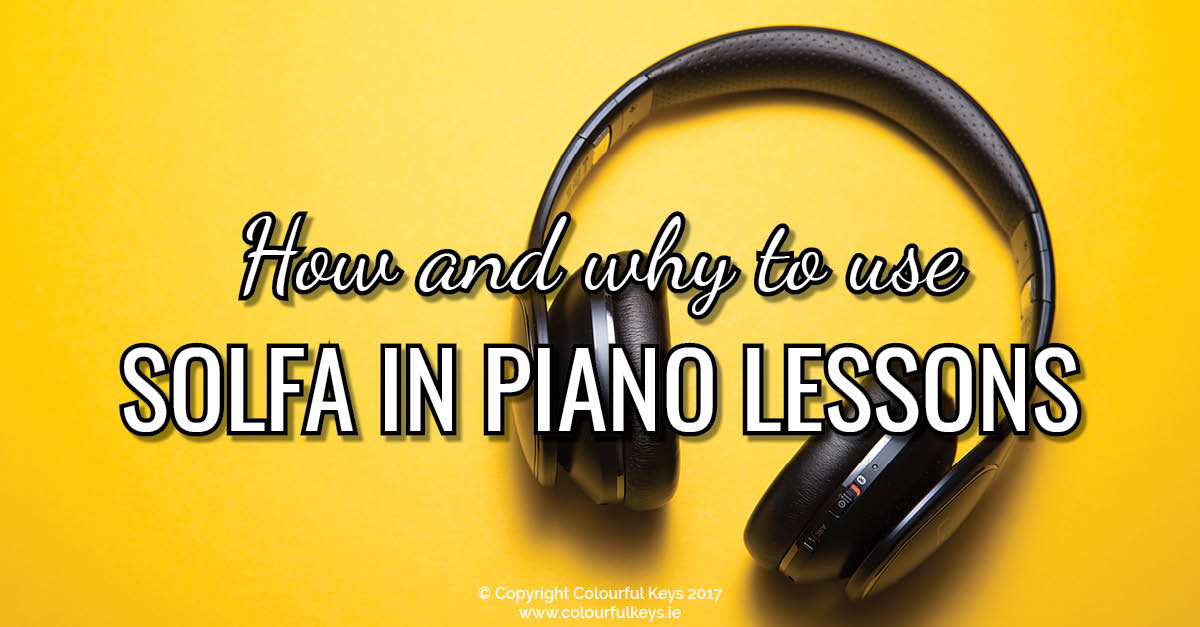 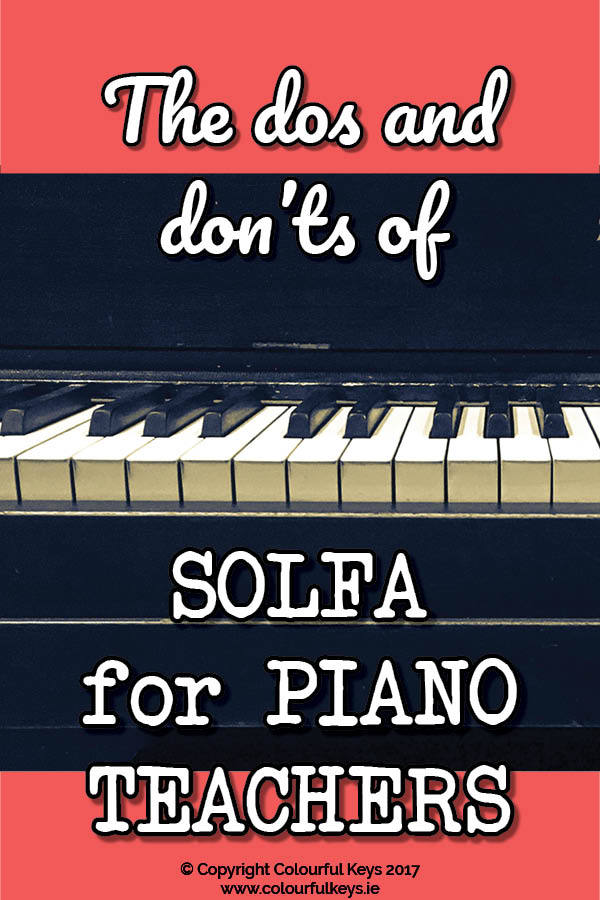 But solfa can be a fantastic tool to have at your disposal and it doesn’t have to be difficult or scary. And you don’t have to be a Kodály expert to make use of solfa in your piano studio either.

I’m hoping the simple exercises I share with you in this post will help you to feel confident getting going with solfa in your piano lessons.

First though, let’s clear up all the terminology nonsense. What even IS solfa?

Solfa is simply another musical vocabulary and is particularly useful for singing. If you’ve seen The Sound of Music you’ll already know that the notes of the major scale in solfa are:

There are additional syllables which are used for sharpened or flattened notes. The only two you’re likely to need are:

The reason you probably only need these for now that they’re the sharpened 6th and 7th in the melodic minor scale.

(If that doesn’t make sense to you right now, don’t worry just focus on the major scale first. Let’s keep it moving!)

Part of the big confusion around solfa for piano teachers who haven’t encountered it before is the 2 (or 3) systems.

When I talk about solfa on the blog and elsewhere, I’m referring to movable do. That means that do is always the tonic note of the major scale. 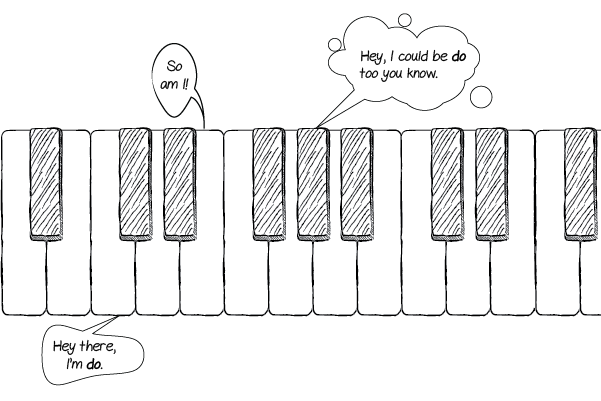 For clarity, I refer to a fixed do system as solfege (although the words are used interchangeably and inconsistently). In fixed do solfege do is always C.

In my opinion there is no point to using both C D E F G A B C and do re mi fa so la ti do to name our notes. I see no advantage to using this system if you are in a country that uses the music alphabet.

By the way, I see no disadvantage to using fixed do solfege as your primary note naming method either. They’re just names after all. We could call them flib gib bib tib sib kib hib squib if we wanted. It wouldn’t change the frequency of the pitches.

Ok, but what’s the story with minors?

To add yet more mudiness to the issue, some who use movable do solfa also move the do when the modality changes…in other words, they always make do the tonic of the scale.

On the surface, this might sound sensible, but it actually defeats some of the magic of solfa.

For those of us with good relative pitch (but not absolute pitch) singing or hearing the E major scale and the B flat major scale feels about the same. Sure, if we hear one after the other they’re different but they feel the same in essence because the pattern of intervals is the same.

A minor scale feels and sounds completely different. So if we sing do re mi fa so la ti do as a minor scale then it’s meaningless. Those syllables no longer allow us to develop a feeling of where we are in the scale.

Which is why I prefer a la based minor approach. This essentially means that the solfa follows the key signature, not the scale/modality. It makes for a much more useful tool.

My favourite version of solfa for piano teachers

So to clarify, this is my preferred system of solfa:

Now that that confusion is (hopefully) cleared up, let’s get on to why you might want to use solfa in your piano studio.

What the point of solfa for piano teachers?

The first reason is very simple: it’s easy to sing.

That’s not the only reason of course. Solfa isn’t just easier to sing – it also gives us more information.

By understanding notes in terms of their place in the scale, we can instinctively do things that would otherwise be difficult, like transposing and chord analysis.

Solfa can also help piano students to become better sight-readers. Because solfa can aid us in feeling relative pitch, it makes it easier for students to hear written music in their head.

It’s much easier to sight-read music if you already pretty much know how it goes. (If you’ve ever seen a student “read” an impossibly difficult pop rhythm you’ve seen this effect in action.) Getting started with solfa in your piano lessons

Are you convinced that you should incorporate some solfa work into your piano lessons?

Awesome. Let me help you get started.

You don’t have to be an amazing singer (I certainly amn’t!) to bring some solfa warmups into your routine.

For piano students I like to start with do re mi and I do this using my solfa posters. I point to them, we jump on them, and lately we bring some boomwhackers into the mix too to add to the fun!

Solfa is great for ear-training. Try this exercise shown in my recent quick clip video. It’s simple and also super fast to do so it won’t steal away tons of precious lesson time.

Sight singing is actually the reason I started bringing solfa into my piano lessons in the first place. It’s very helpful not just for the singing skills developed, but also to work on students’ understanding of intervals on the staff.

You can see how I use sight singing in my Thinking Theory books in this video.

Solfa can also be used to start a conversation about transposing, in a language that kids can understand. E.g. “If we make this note mi, where are do and re?”

Are you a beginner to solfa?

I know I certainly was only a few years ago. I hope this article will help you to gain some confidence using solfa in your piano studio.

Let me know what you think about the role of solfa in piano lessons in the comments below or in the Vibrant Music Studio Teachers group on Facebook.

Nicola Cantan is a piano teacher, author, blogger and creator of imaginative and engaging teaching resources. She loves getting piano students learning through laughter, and helping teachers to teach through games and off-bench activities, so that their students giggle their way through music theory and make faster progress.

Colourful Keys is a participant in the Amazon Services LLC Associates Program, an affiliate advertising program designed to provide a means for sites to earn advertising fees by advertising and linking to amazon.com.

Subscribe to our newsletter and we'll send you the target setting worksheet that will help your students make their practice more thoughtful.

Subscribe to our newsletter and we'll send you the target setting worksheet that will help your students make their practice more thoughtful.

We use cookies to give you the best experience on our website and we share this data with marketing and advertising partners. Do you consent to the use of cookies?OK!NoRead more